published on October 31, 2016 in all
tags: aws lambda api-gateway performance

We decided to hide some EC2 instances in private subnets (VPC). They’re accessible via bastion hosts or via API (API Gateway & Lambda). Works well, but there’s one weird issue — cold lambda start time is over 10s sometimes. We experienced even 15s. This is not acceptable and I’m seeking for answers to my questions.

Internet is full of answers, but they’re not clear. Wild guesses. So, I decided to quickly hack benchmark to get more accurate (still not precise) answers.

Scroll down if you’re not interested in details, but want to see results only.

UPDATE: Thanks to Moshe Ben Shoham!

Just in case anyone come across this great post, there are some good news: in re:invent 2018, the Lambda team announced Lambda cold start in VPC is going to be a none issue soon, at least according to this .

Every container has ephemeral disk capacity (0.5GB) mounted to /tmp. Whatever lambda stores there, it stays there if container is reused. My reuse test is very simple. Container is reused if file /tmp/perf.txt exists. If not, lambda is going to create it. Check Python, JavaScript and ClojureScript lambda function handlers.

More info about container reuse on the AWS blog. Old, but enough to get a clue.

I would like to see if there’s a difference between languages, memory sizes and VPC [not] set. I prepared several variants:

NOTE: There’s no way how configure CPU for lambda function. It’s tightly tied with memory size. Bigger memory size, faster CPU. This is the reason why I made different memory variants as well.

Again, your enemy limits. Requests per seconds default limit is 1,000. Burst 2,000. This limit is per account; don’t kill your other APIs with stress testing.

We’re interested in ENI limits. You can have 350 network interfaces per account. And here are limits per instance. I’ve got t1.micro for the benchmark purpose, so, the limit is 2.

Time to learn more about ENI. It’s a virtual network interface attached to EC2 instance in your VPC. ENI can be created, deleted, attached, detached, … How does it work with Lambda container? ENI is created (or reused) during lambda/container initialisation process. This ENI is used within lambda container to allow it to communicate with your instance. Lambda ends, container is suspended, but ENI is still there. ENI is deleted when the lambda container is deleted. It takes some time and I want to know when approximately.

Lambda was not able to create an ENI in the VPC of the Lambda function because the limit for Network Interfaces has been reached.

Lambda role must have policy allowing to create ENI, delete ENI, … Do not create your own policies, but stick with the service one created and maintained by the AWS guys — AWSLambdaVPCAccessExecutionRole:

BTW I tried to create my own policy. I did forget to add delete interface action and drained ENI pool pretty quickly. Managed to create 352 ENIs (limit is 350).

It fires 15,120 requests in total and it runs for more than two hours. Sleep is there to approximate time when the container is reused and when it isn’t.

Should be enough to get some data and it also shouldn’t trigger throttling on the AWS side.

Always run redeploy.sh script before you run this benchmark. Lambda functions are redeployed and all containers are trashed. You can check that the first endpoint requests (up to 10) should return no container reuse.

No lab, no equal conditions, … Do not compare absolute values. I’m benchmarking it before lunch, in the afternoon, during night, … On my VDSL lines, over the air (LTE), at home, at work, … The only thing which is constant is region (eu-west-1) and benchmark settings (endpoints, memory sizes, VPC, number of requests per endpoint and number of workers).

We’re going to focus on vdsl-home-morning data set for the purpose of this analysis.

Pretty big deviation and kind of disappointment. CSV table, raw data, … all these things are not clear. Let’s dive in, use R, plot some charts, check what’s wrong and try to fix it.

Following part was done with cooperation with Tomáš Bouda. Our math, stats, … magician. Many thanks Tobbi!

First thing to check is histogram. It shows that lot of requests are quick, but there’s something weird going on around 10 seconds. 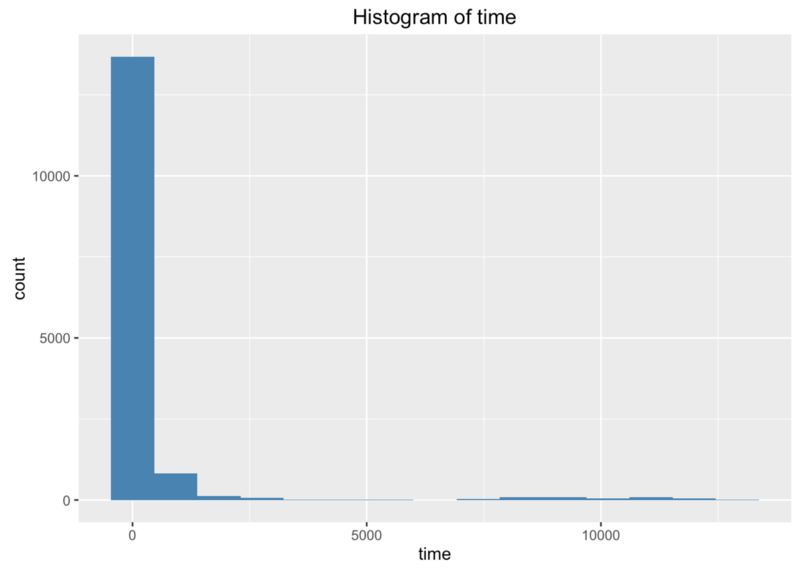 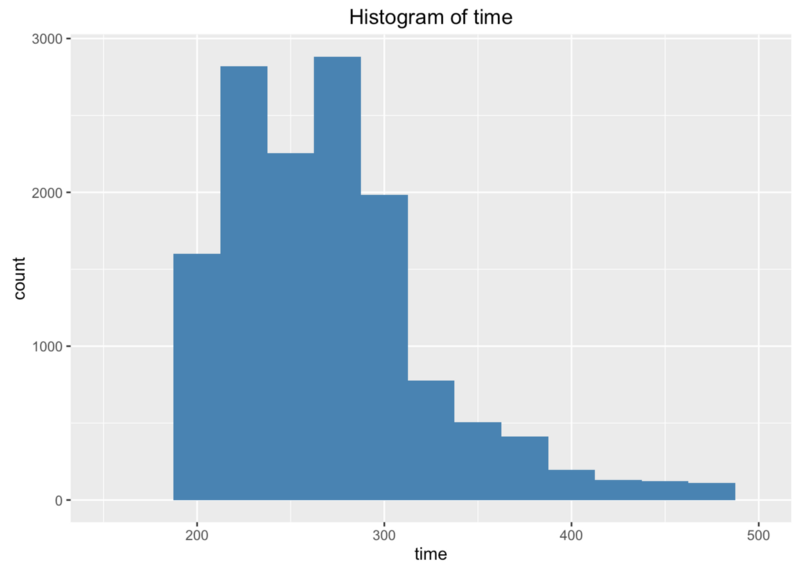 Histogram is not going to help us more, we’re going to try box plot. Much better information. 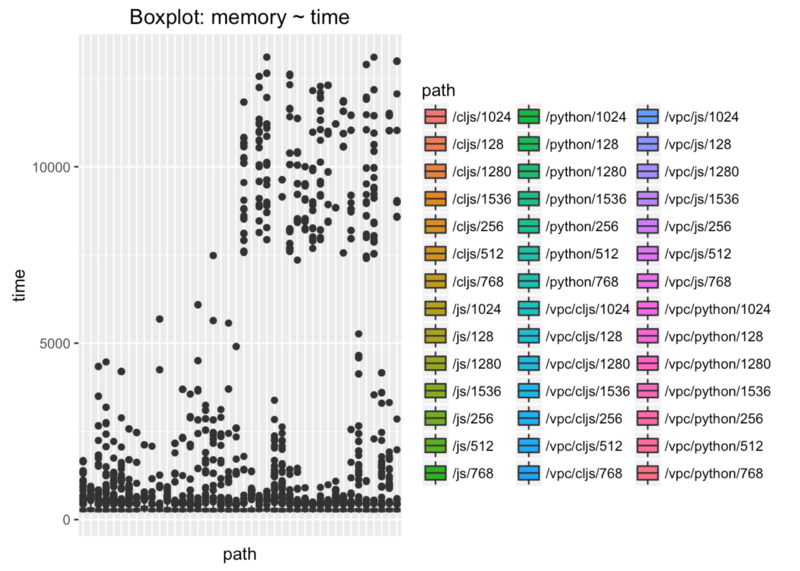 We have lot of input variables and we have to get rid of them. Let’s limit time to 200-500ms in this box plot.

What does it say? If everything works as expected, there’s no difference between languages and memory sizes.

We can safely ignore language and memory size variables. What do we have now? VPC and lambda container reuse variables.

X axis shows when requests were fired and Y axis shows their duration. 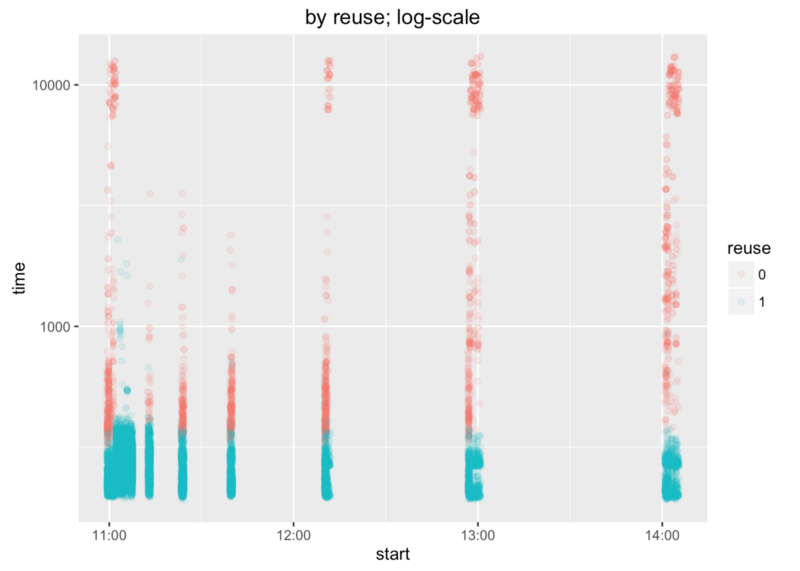 First batch has several durations around 10s. That’s “okay”, because lambda functions were redeployed before benchmark and there were no containers to reuse. But what we can see is that containers weren’t reused about one hour after the benchmark start. 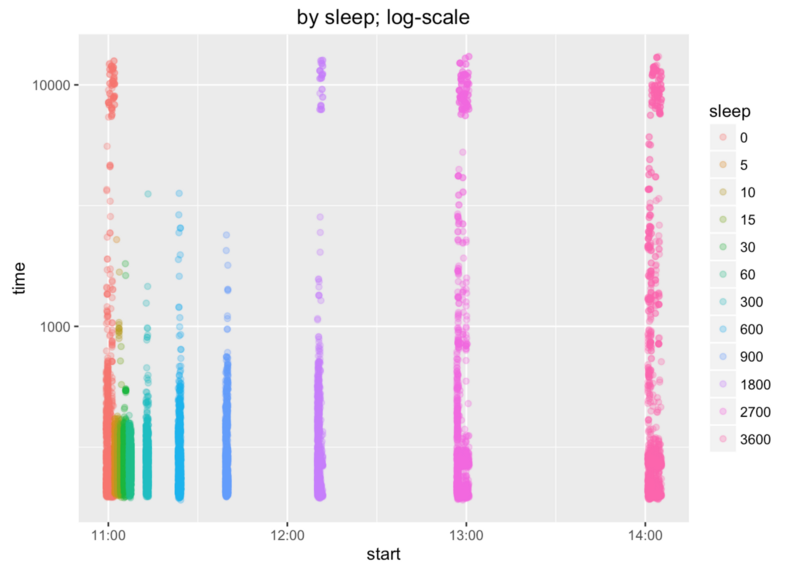 Some numbers and explanation from Tobbi:

To ensure ourselves let’s check the numbers. 2nd and 3rd columns contain sample mean and sample standard deviation. We can see that most of the means are below 300ms. The bold rows have higher means since right-skewed distributions tend to pull mean off.

4th to 6th columns contain a probability that call remains below given time limit using Gaussian distribution, e.g. norm.1000 represents probability the call is below 1000ms. Let’s ignore the bold rows since these distributions are bi-modal and not Gaussian.

The last two columns contain empirical probabilities based on the test data, e.g. emp.500 show the probability the call remains under 500ms.

As we can see, we have pretty reasonable times (below 1 second) for up to 900s gaps.

Last thing we have to find is how VPC configuration influences all these durations. We’re lucky with another box plot. 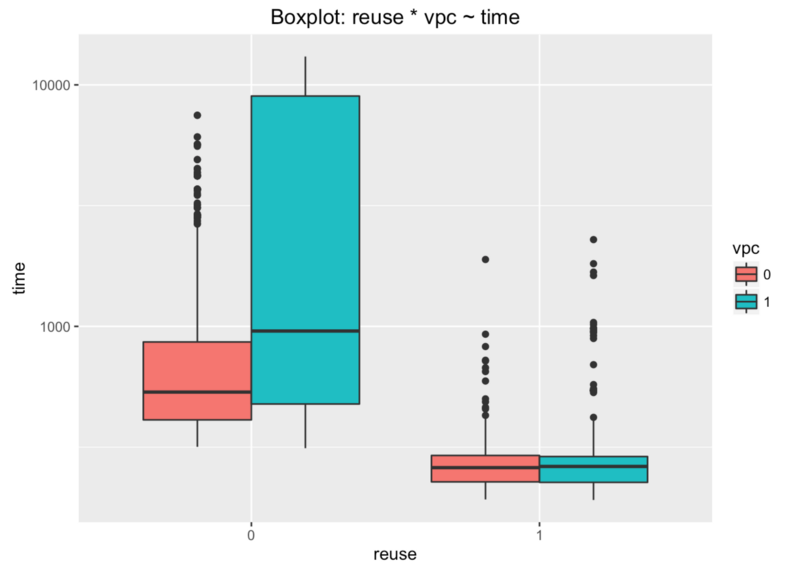 We can say that these unacceptable durations come from lambda functions with VPC when their containers are not reused.

We already found that these containers are not reused after ~15 minutes. I tried to keep them alive with quickly hacked keep alive script.

This script fires 10 requests with 10 workers per endpoint to keep alive 10 containers. That’s because our benchmark script also do use 10 workers. These requests are fired in 15 minutes interval. What happened? 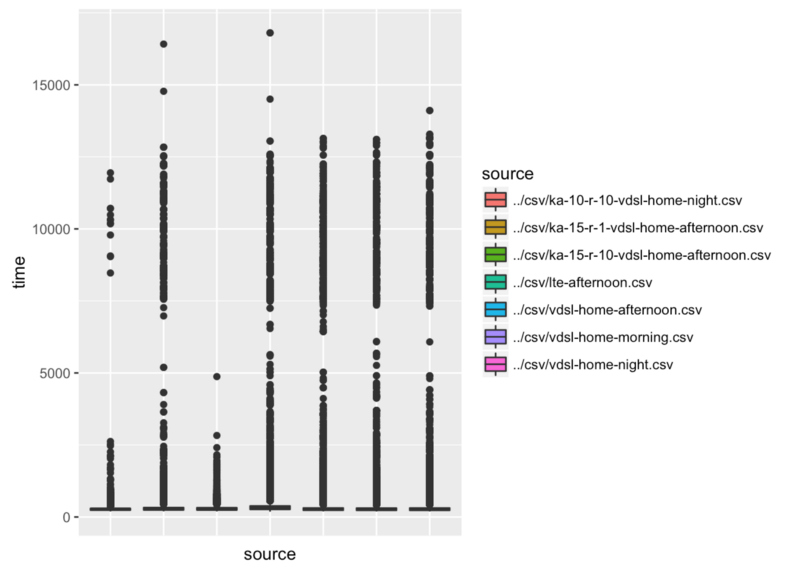 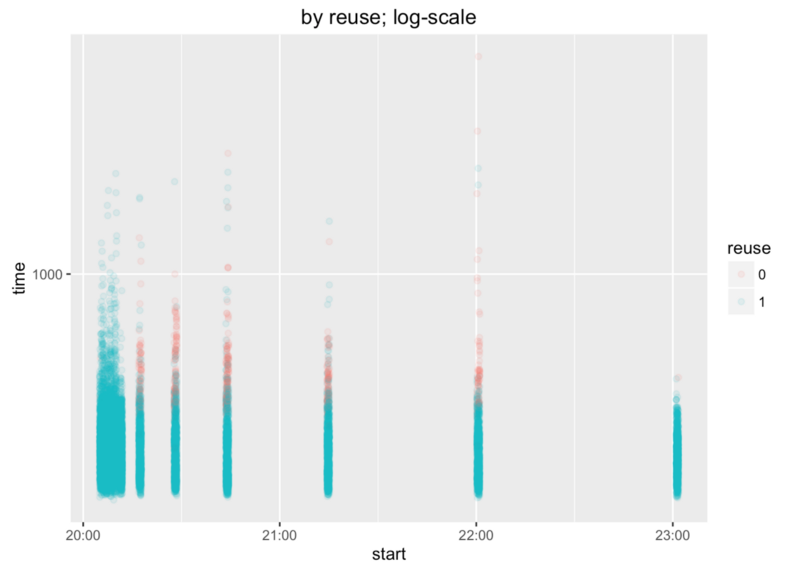 We can say victory 😉 Not victory actually, but huge progress at least.

Be aware that our testing lambda functions are very simple. They just returns lambda container reuse info. These numbers and findings can differ if your lambda has lot of dependencies, does lot of other things, etc.

Based on these facts, we can say that:

This will not solve your issue completely, but will help a lot. Especially if your lambda function is rarely used and containers are not reused. It’s a nightmare to explain to your user that he has to wait for 15s to get some response from your application.

Not sure if AWS guys will be happy, but what else can we do?

Do you want to play with this benchmark, roll your own analysis, …? Here’s the repository link with all lambda functions, scripts, data sets and HTML outputs.